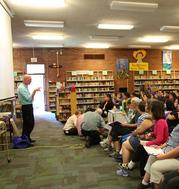 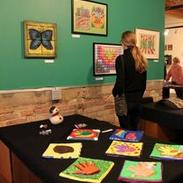 Washington School for the Deaf 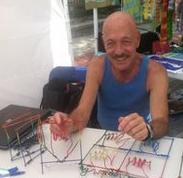 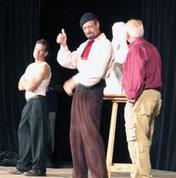 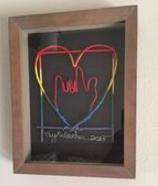 Guy Charles Wonder III is recognized as one of the signatories of the Deaf View/Image Art (De’VIA) manifesto. He
is an inspirational De’VIA artist whose artworks will be forever cherished.

Guy Charles Wonder III’s first Deaf generation began when his maternal Grandma Lowell became deaf due to
unknown reasons. Guy’s Great-Grandma Lowell established oral school in the Tacoma area and enrolled his
maternal grandma in the oral school and never got a chance to attend WSD. She graduated from Lincoln High School in Tacoma. Guy believed he got his passion of art from his Grandma Lowell because she was an artist, too.

Guy’s Great-Grandparents Wonder could not raise Grandpa Wonder when he became deaf from spinal meningitis. Grandpa Wonder was raised in Pennsylvania by his aunt and when he graduated from high school at Pennsylvania
School for the Deaf, he moved back to Tacoma, WA. Then he met Guy’s deaf grandma in Tacoma, WA and got married. They raised all children and grandchildren in Washington. Guy’s father graduated from WSD in 1942 and his mother, Jean Lowell graduated from WSD in 1942 as well. They got married and lived in the Seattle area.

Guy’s father worked at Wonder Bakery as a baker while his mother, Jean, worked as an assembler for an industrial company. Later as Guy got older, their parents got jobs working at the Washington School for the Deaf so they moved to Vancouver, WA. His father was a bakery teacher and his mother was a houseparent for the girls’ dormitory.

Back in 1960’s, in primary school classrooms, the students were divided into two groups: the students who have ability to speak orally were often put together for all classes and another group of students who did not have the ability to speak were placed in separate classrooms. The ones without oral skills were considered the unfortunate ones. Apparently, it was running like this for years. Guy recalled that sign language was not allowed in the class-room. Students would be punished if they signed in the classroom. Mainly, in the primary school, students were banned to use sign language in the classroom. However, in the secondary school, they were allowed to use sign language in the class-room. Guy was placed in oral classes because he had oral background.

There was no pre-school program at WSD during his time. His parents sent him to Summit Oral School in Seattle, WA from age 3 to 6. Because his parents were deaf, he already was exposed to ASL at home. He recalled that when he joined WSD at age 6, he was stunned to see that peers of his own age weren’t able to communicate as well as he did. Basically, many students lacked sign language skills due to lack of communication or education background at home. He ended up socializing with older kids rather than peers of his own age because the older students had better communication skills.

When he was in the classroom, he remembered that if any student did not speak properly, s/he would be hit with a stick repeatedly. Guy was fortunate enough to never have been hit with sticks, but he had seen so many students being hit with the sticks by the teachers for not being able to pronounce a word correctly. He recalled a female teacher with a George Washington look who smell like a mint every time she spoke to him, she was often being too strict. Even in the dormitory, the house parents who were hearing were encouraged not to use sign language. They were encouraged to speak orally to students on a daily basis. Generally, the hearing house parents were not required to learn sign language so they did not know any sign language. To discipline the students, the house parents used a stick, tapping at them to make sure the students line up straight from the littlest kid to the tallest. Gestures and home signs were often used to communicate with students.

Many students complained about lack of communication among the staff at the school. Guy felt he had to do something so he talked to his parents about it. His parents decided to talk to Superintendent Epperson about it. In 1955, Superintendent Epperson rehired a deaf house parent, Mrs. Bernice Dayton, former WSD student, 1925-26 (mother of Renwick Dayton, Class of 1954). He also hired more deaf teachers. However, the school principal, Mr. Hoxie believed in oral education very strongly so he placed the deaf teachers with the students with no oral skills only. Then, in 1962, Mr. Hoxie moved to Idaho for a new position. Mr. Epperson appointed Archie Stack as a new deaf principal. Mr. Stack changed the educational system by encouraging sign language in the classroom. Mr. Stack also merged students from two different groups and grouped them according to their writing and reading skills. Guy emphasized that during his time, ASL was the manual sign language they strongly used until in the 1970’s when Jean Stokesbary brought the new manual sign language, Manual English, from Gallaudet University, thinking it would help students’ writing skills. Clearly, it did not work out. WSD brought ASL back again later on.

After a careful decision, Guy decided not to go to Gallaudet College because it did not cater to his passion for art. It was not easy on Guy having his very own father telling him that he would not have any future in art. However, Superintendent Epperson believed in Guy and fully supported his passion for art. Supt. Epperson told him to pursue his dream. Guy did, but did not know where to begin. He began to work for Tektronix as an assembler. For 6 months, he did not feel challenged.

With full support from his boss, he quit to pursue the dream of working on window displays. He applied, but did not have enough experience to be hired so he offered Charles F. Berg company his time as a volunteer during Christmas season. They hired him. How-ever, he wanted more and he ended up working for Meier and Frank’s in Portland, OR doing window display with mannequins.

After 2 years, in 1969, he decided to move to New York for more artistic challenge. He attended NTID/RIT and received an Associate Arts degree in the school of craftsman-textile design. He moved to NYC to matriculate at the NYC School of Interior Design for 2 years and did freelance work on interior designs for home and business. Then, he worked at the Museum of Modern Art and the Metropolitan Museum as a deaf tourist/lecturer for 2 yrs. Then, he worked at Bloomingdale’s in NYC. While he worked there, he designed major window displays and home furnishings displays. As a hobby, he built rustic furniture.

Over the years he has also been associated with Gallaudet University, where he was commissioned to create a sculpture with college students for Deaf Way in 1989. It was placed by the cafeteria at Gallaudet, however, it became so deteriorated that it was unfortunately taken down. After experiencing the De’VIA, he realized that he wanted to become involved more with creative artwork related to the Deaf theme. He couldn’t do that at Bloomingdale’s. Guy decided to move to San Francisco, California where he designed sets for the California Sign Rise Theatre. Guy was the Artistic Director for Visual Arts of "Celebration: Deaf Artists and Performers" for Deaf Media, Inc. in 1991 and 1994. Deafness and Deaf Culture influenced him and his creativity. He taught children and adults at the Oakland Museum Project, renovated homes in the Bay Area and designed beautiful gardens. Most recently, he taught a workshop and led gallery tour at the Yerba Buena Center for the Arts. While he was in San Francisco, he had his artwork displayed at Hunters Point Shipyard Art Gallery. His De’VIA artworks continue to attract many people.